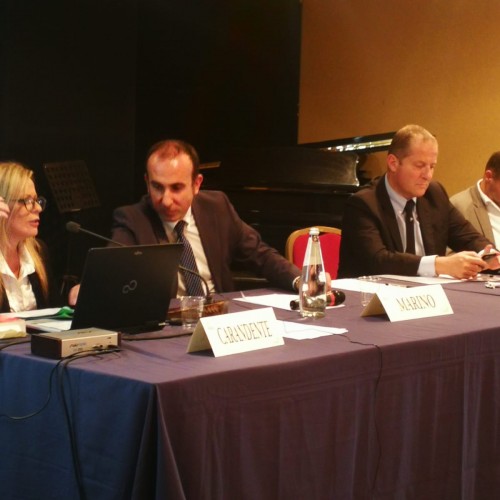 The XXV National Congress of the Italian Young Lawyers Association held at the Teatro Vittorio Emanuele in Messina from 17 to 19 October saw this year the participation of Sintesi Business Network in two workshops respectively on “Internationalization of Business in the New Global Context: Focus on Cyprus and on Cross-Border Extraordinary Transactions within the EU and Extra EU” and “Internationalization and Profession: The AIGA path”.

Following Giuseppe Marino as Secretary General of the Cypriot-Italian Business Association together with Costas Katsaros, Lawyer and Founder Partner of Emilianides Kastaros Law Firm based in Nicosia (CY), one of the most important firms in Cyprus, presented Cyprus as a fast developing country in the Center of the Mediterranean, focusing both on the economic sectors that offer the greatest opportunities in the country, including Energy, Shipping and Infrastructures, and also on the legal and tax system of the Island today more than ever attractive for investments and foreign settlements.

The morning session ended with the presentation of Marianna Carandente, Legal Advisor of Ortenzi Consulting Firm based in Rome who dealt with “Extraordinary Transborder Transactions in the EU and Extra EU”, who focused particularly on the crossborder mergers and on the effects of the same, deepening also the practical aspects of such operations as well as the most recent jurisprudence on the subject.

After the busy schedule of the morning, the work then continued in the afternoon, introduced and moderated by Valentina Billa, National Responsible of the Internationalization Department of AIGA, who in addition to presenting with the colleague of the Internationalization Department Francesco Memmi, the AIGA convention with ICE represented by Dott. Giovanni Mafodda from related Marketing and Coordination Office asked to the other speakers Giuseppe Salsarulo of the AIJA Executive Committee, Angela Bonacina, AIGA contact person in Frankfurt, Francesco Scalia, representative of the Italian Chamber of Commerce in Dubai, Giuseppe Marino, Founder Partner of Business Networking to tell and share their international experiences in various countries.

At the end of the workshops, ample space was given to networking and the questions to the individual speakers who saw the great interest in the manifold subjects.

For information and details on the contents of the article, write to: segreteria@sintesinetwork.com

The annual Shipping and the Law conference, this year entitled “The Shock of the New” was held in Naples on October 9 and 10 in the evocative setting of the Sala dei Baroni at the Maschio Angioino certainly on of the most important international level held in Italy in the field of Shipping.

At the center of the debate, as pointed out by Avv. Francesco S. Lauro, “the challenges that the great and pressing political, economic, technological and regulatory changes will pose not only to the world of maritime industry, but also to the entire economy and international trade over the next decade, up to 2030 and beyond”.

Among the many participants will be the international leaders of the shipowners’ associations: the president Esben Poulsson and the vice-president Emanuele Grimaldi, of the International Chamber of Shipping (ICS); the elect president of the European Community Shipowners Associations (ECSA) and member of the Stena group Claes Berglund and the past presidents John Lyras and Thomas Rehder; the president of Confitarma Mario Mattioli and that of the Young Shipowners Group Giacomo Gavarone.

Particularly interesting among the others was the report on the international scenario by the vice president of the Istituto Affari Internazionali, former Chief of Staff for Defense, General Vincenzo Camporini, who spoke on the international geopolitical balance with the intervention entitled “Evolution or Revolution?”.

Sintesi Business Network, as Cypriot-Italian Business Association, was present at the event considering it particularly interesting from the point of view of the development and consolidation of international relations in a sector of particular interest to various associates.

For information and details: segreteria@sintesinetwork.com

The XXV National Congress of the Italian Young Lawyers Association will be held at the Teatro Vittorio Emanuele in Messina from 17 to 19 October. In this context, SINTESI BUSINESS NETWORK will be present in the morning of Friday 18 with a workshop entitled: “Internationalization of Business in the New Global Context. Opportunities for Professionals” who will see the participation of qualified speakers, some of whom come from abroad who, with a practical and operational approach, will explore the most current issues of interest to legal professionals inherent in the processes of Internationalization of Business as well as carry out a specific Focus Country on Cyprus, European country currently in great development.

The works after the introduction of Giuseppe Marino,  Company Lawyer and Secretary General of Sintesi Business Network, foresee the interventions of Giuseppe Mongiello, Partner of the Tonucci & Partners International Law Firm of Rome that will outline an overall picture on “Internationalization of Business and International Company Law”, by Giuseppe Marino, in his capacity as General Secretary of the Cypriot-Italian Business Association, which together with Konstantinos Katsaros, Founder Partner of the International Law Firm Emilianides Katsaros of Nicosia (Cyprus) will take care of the specific Focus on Cyprus and Marianna Carandente, Lawyer and Legal Advisor of Ortenzi Consulting Firm of Rome that will deal with the subject of “Cross-Border Extraordinary Transactions within the EU and non-EU”.

At the end of the workshop a specific space will be provided for in-depth analysis and B2B meetings dedicated to professionals.

For all info send an e-mail to: segreteria@sintesinetwork.com